Last Updated on October 15, 2021 by worldoftravelswithkids

We hope you love these Facts about Wave Rock Australia!  The huge rock which looks like a wave crashing down is a lot of fun and has been one of Western Australias most popular attractions for years.

Rock Waves around the world are places that appear water (or waves) have solidified in time – in Western Australia, The Wave Rock has gained attraction as it seems like a surf wave has been captured in time.

The other famous rock wave is The Wave, Arizona – we’ve provided a little bit of information below comparing the two famous places!

Let’s get started, with some Wave Rock Facts for Kids, which will get you excited for your next trip to Western Australia!

This post may contain affiliate links which means that if you make a purchase from our website, at no extra cost to you, we may receive a small commission to keep our site up and running. 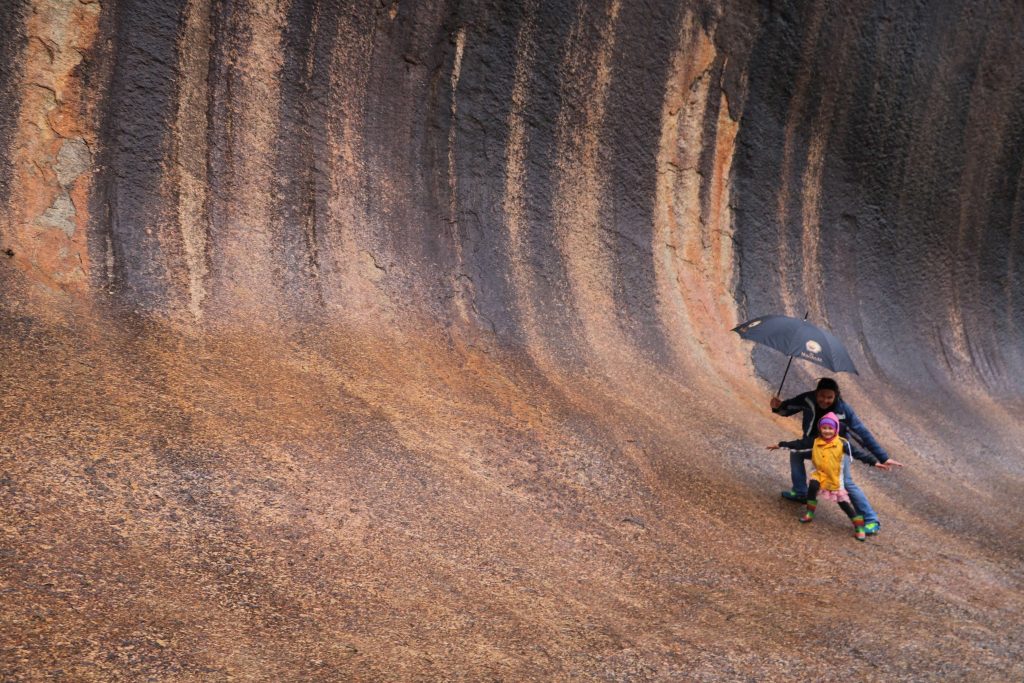 Facts About Wave Rock In Australia

Where Is Wave Rock Australia Located? 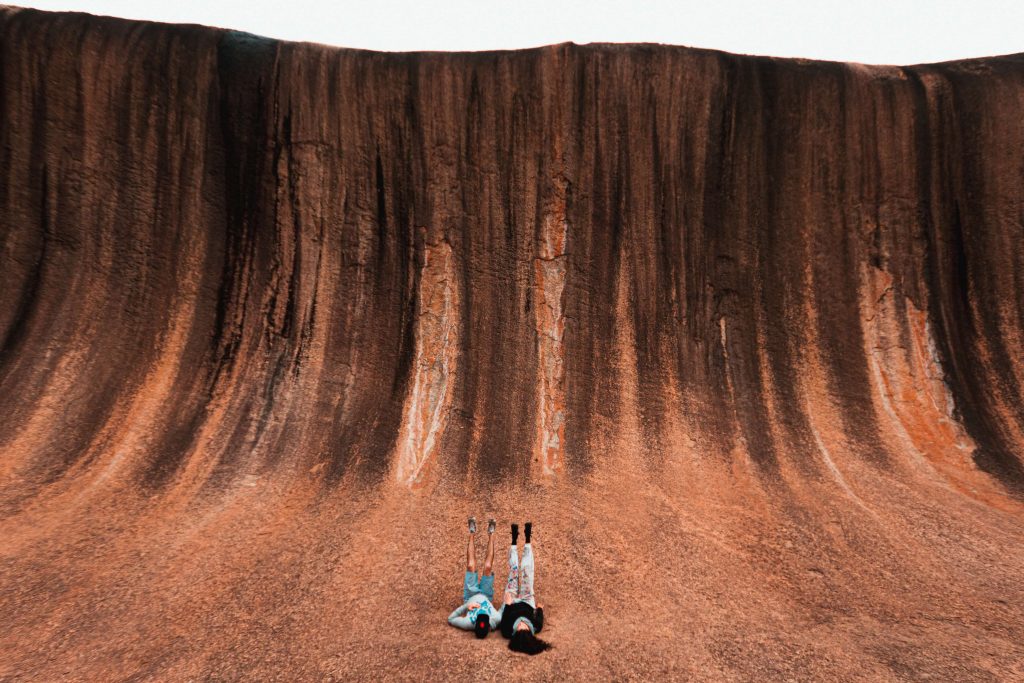 What Is Wave Rock?

It is a natural rock formed like a tall crashing ocean wave. The “wave” is about 14 m (46 feet) high and around 110 m (360 feet) long.  The gently sloped formation has caused a great deal of interest from both the general public and geologists for many years. 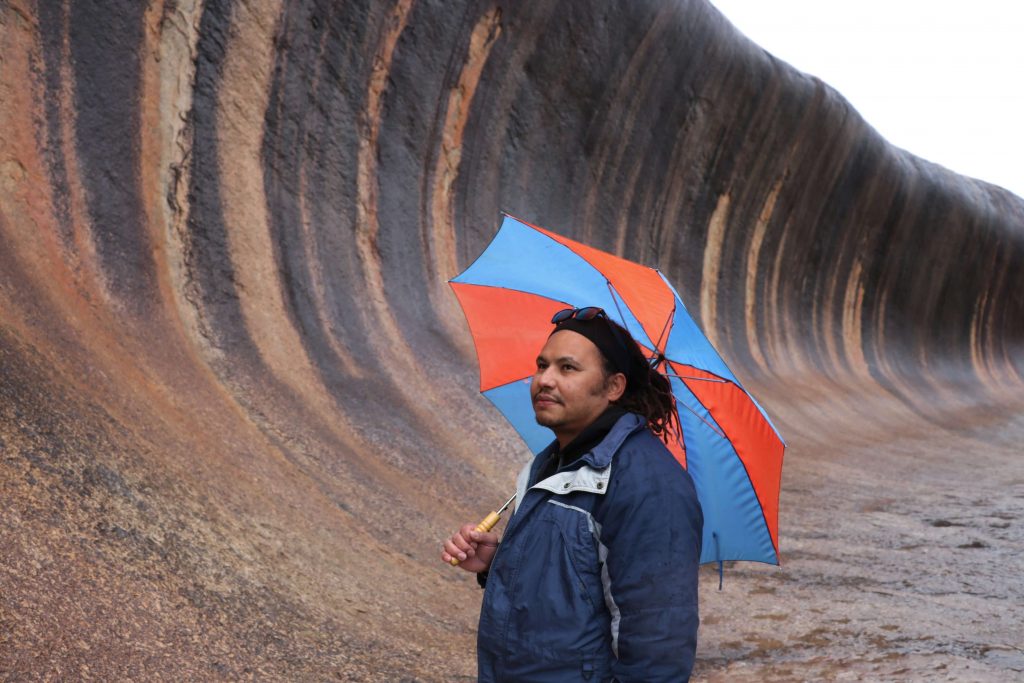 What does Wave Rock Perth have In Common with other Famous Rocks?

Wave Rock is a granite inselberg that has been weathered over millions of years by wind and rainwater.  Did you know that Australia’s other famous Rock, Uluru/ Ayers Rock is also an Inselberg?  If you are curious about rocks, you’ll love our Uluru Facts For Kids.

The age of Wave Rock is mind-boggling – it is 2.63 billion years old, made of granite, with multi-colored stripes created by the rain washing chemical deposits, carbonates, and iron hydroxide, down the face of the rock, forming vertical stripes of greys reds, and yellows.  The wave-like shape was formed by the gradual erosion of the softer rock beneath the upper edge over many millions of years.

What is the dreamtime story of Wave Rock?

In Australian indigenous dreaming (history/stories) the rainbow serpent represents a deity, who gives life as well as creates and destroys nature.   It is believed that the serpent travels from one waterhole to another (where the indigenous people would gather), blessing the people when pleased and causing destruction when enraged.

The local Ballardong indigenous people believe that Wave Rock was created by the Rainbow Serpent when she dragged her swollen body over the land after drinking up all the water. 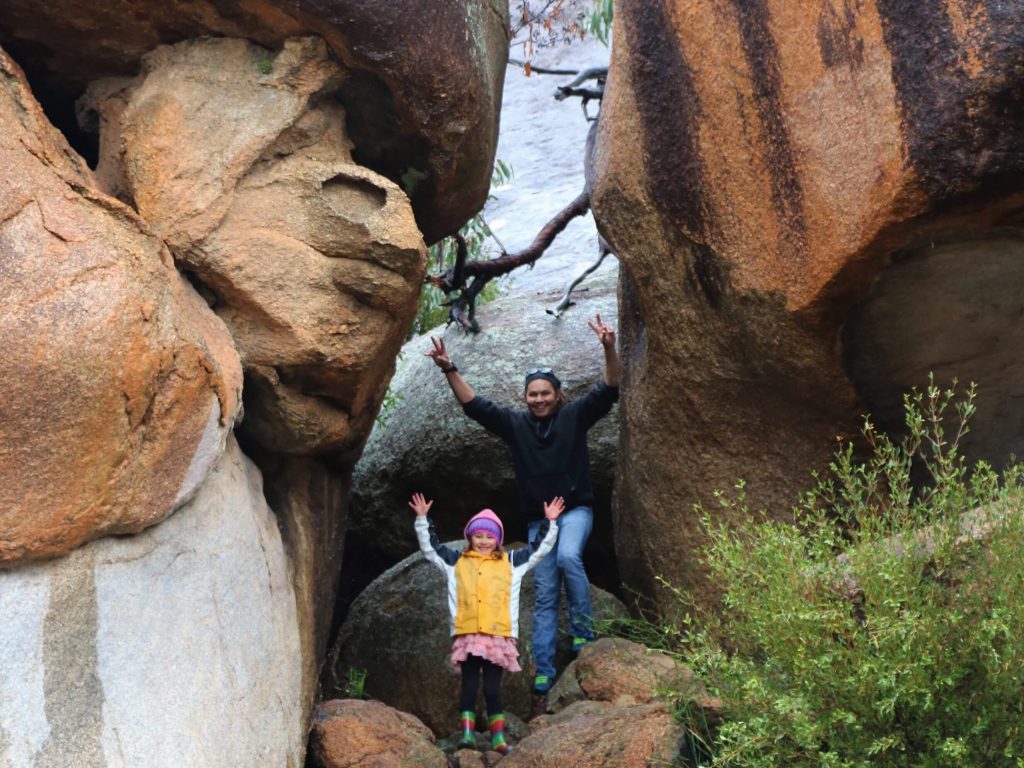 The recent history of Wave Rock is actually pretty short – it is hard to believe that until the 1960’s Wave Rock did not have an English name.  That all changed when James Hodges, a keen photographer had his photo of the rock feature at New York’s World Fair in 1964.  After the picture was published in the famous National Geographic Magazine tourists began to visit Wave Rock Australia.

How Does Wave Rock Australia Compare To The Wave Arizona?

The Wave Arizona is located in the United States and is on the slopes of the Coyote Buttes in the Paria Canyon-Vermilion Cliffs Wilderness.  It gets its fantastic wave shape from Navajo Sandstone dunes that have calcified both vertically and horizontally, with slow wind and water erosion have created the peculiar and very unique rock wave.

The Wave Arizona began to be formed 190 million years ago.  This makes it much younger than the Wave Rock Perth, which is a very ancient  2.63 billion years old,

Given Wave Rock Australia is located in the outback, it is not inundated with thousands of visitors each day.  On the other hand, to visit Coyote Buttes North (The Wave) you need a permit, which is offered on a lottery system.  The process sounds quite fascinating and it’s not guaranteed you will get a permit to do the hike!

How many people visit Wave Rock each year?

It is estimated that over 100,000 people visit Wave Rock each year, which is a lot of people considering that Wave Rock is in the middle of the outback!  To compare, The Pinnacles in Nambung National park are visited by around 250,000 each year, and it is closer to Perth

Wave Rock is not the only uber cool rock formation in the middle of Western Australia, right next door to Wave Rock is the Hippo’s Yawn, which we visited on a lovely walk through the bush.

Lake Magic really captures my imagination – and was a clever addition to the things to do around Wave Rock and the Hyden area. Located less than a kilometre from Wave Rock – you can walk to Lake Magic through a dramatic salt affected landscape.  A man made swimming pool Lake Magic is a 20m round, 6m deep swimming pool-like gypsum pond whose buoyancy and therapeutic properties are greater than those of the Dead Sea.  The name Lake Magic apparently comes from the sense of magic and euphoria you feel by floating around in the middle of this dramatically beautiful landscape with Slide in and sense weightlessness.

The landscape around Wave Rock can be pretty flat – and red – but it really comes to life in springtime, when the flowers spring into life.  In our opinion one of the best times of the year to visit Hyden are spring, when not only can you be awed by Wave rock, but you can see some great flowers.  Or, if you’re considering a trip in September, time it for the annual Wave Rock Weekender music festival, which is supposed to be a real trip.

What birds and animals can be seen around Wave Rock?

While obviously the rock is the most visible attraction around Wave Rock, if you are quite and observant you might be rewarded.  There are over 40 species of bird around Hyden – The smallest are the wrens, and the largest are the emus and wedge-tailed eagles.   Animals that are frequently seen in the Wheatbelt area include Kangaroos, emus, wallabies, lizards and echidnas.  If you love kangaroos, take a look at Facts about Kangaroos for Kids.

Look up at the Wave Rock Night Sky

Wave Rock is located in the Australian outback, famous for clear, unpolluted skies.  Many people don’t realise that when you are far from the city lights, the stars twinkle bright and clear.   So if you are staying in some Wave Rock or Hyden Accommodation, make sure you go outside and look up Visit aswa.info/nightsky.html for more information on what constellations to  look out for.

Wave Rock is not the only amazing rock wave formation in the area!

Elachbutting Rock near Westonia is a natural formation which has similar features to the well-known Wave Rock near Hyden. (eg, a wave like formation)  If you take the walk trail around the rock you can see some of the local birds or see the caves that have formed within the rock.

Elachbutting Rock is an hour’s drive north of Westonia and four hours northeast of Perth. It is 2.5 hours/250 km directly north of Wave Rock. There are no facilities at the rock, so food, water and supplies.

What is the third largest monolith in Australia?

So – what is the third largest monolith in Australia – and what has it got to do with Wave Rock?

Kokerbin Hill, it is the third largest monolith in Australia and is located 180 kilometres (or about 2 hours’ drive from Hyden and Wave Rock and approximately 231km (approx. 3 hours’ drive) east of Perth.

This massive monolith is 9 hectares in size and 122m high with interesting formations and caves. Situated approximately 40km north-west of Bruce Rock from the top it offers panoramic views of the surrounding countryside. While at Kokerbin Hill make sure to look for the Wave Wall, Dog Rock and Devil’s Marbles.

If you are wondering, the largest monolith in Australia is Uluru/Ayers Rock and the second Mount Wudinna in South Australia being the second largest

So… if South Australia also claims the title of second biggest monolith in Australia (after Uluru) for the rock at Mount Wudinna, don’t forget that the world’s biggest rock – a monocline – is found in Western Australia at Mount Augustus (or Burringurah using its Indigenous name)   That’s right, coming in at a cool 1700 million years old; it is three times older than Uluru and twice its size, making it the largest rock in the world! Located in the Gascoyne Murchison region, Mount Augustus soars 1,105 metres above sea level and 858 metres above the surrounding plain and ancient Indigenous rock art decorates the caves at the mount’s base.

One of my kid’s favourite books is Alison Lester’s “Are we there yet?” where they stop at get their picture of the Haystacks near Streaky Bay. We love then looking up information about the places that we read in books (and that is how the Facts for Kids series came about).

So if you like rocks, then you’ll be interested by Murphy’s Haystacks which are a group of wind-beaten rocks on the top of a hill south of Streaky Bay. Apparently from a distance they look like haystacks.  Like at Wave Rock Western Australia Gradual weathering has shaped the inselberg rock formations to reveal the weird and wonky pillars and boulders we see today. They are also being slowly worn away as the weather continues to pound them!

Hyden Accommodation and Things to do at Wave Rock WA

Join us on a fascinating trip to Wave Rock – and get our recommendations for the best Hyden Accommodation, and places to stay around Wave Rock.  Wave Rock Perth is, without a doubt, one of Western Australia’s... 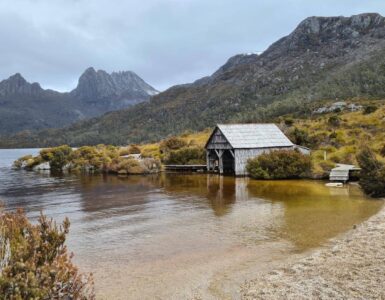 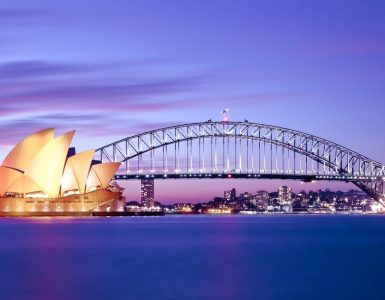 Things To Do In Busselton With Kids

Hyden Accommodation and Things to do at Wave Rock WA

Best things to do in Margaret River in Winter