Last Updated on August 8, 2021 by Travels with Kids

The Wellington Square new playground is an awesome contender for the best playground in Perth and is one of the first dual named.  It is also known by the name Koolangka Koolangka Waabiny – which means children’s playground in the local Whadjuk Nyoongar language.

Perth playgrounds are simply awesome so to make the “best” list is saying something.  This playground, opened in April 2021 one of the closest to Perth city, is fantastic, both in design and functionality.   It has various clearly defined sections from a water playground, to a skate park, pump track and also basketball courts and that is a lot of playground area!!!

In addition, the large expanse of lawns and parkland of Wellington Square is a wonderful place to get some fresh air in the middle of the city (East Perth).

Are you in a hurry to visit the Wellington Square Playground and want to find out if it’s worth your time? Jump to “my kids review”.  Take note, the reviewers were aged 11, 7, and 2.5 on the day we visited!

The theme for the community playground is ‘Landscape of Play’.  The design is influenced by Aboriginal themes and Western Australian iconic landforms.  The floating discs above the playground reflect the stars and the sky from Dreamtime Stories.

There are a number of Banksia Flowers through the playground.  As the Banksia Littoralis is endemic (that is, native) to the Perth area.  As a parent, I love the indigenous inspiration and explanations.  I hope that such inclusivity and celebration will be part of a more inclusive Western Australia.

The park and playground will bear the dual name recognition of Wellington Square’s significance to many members of the Aboriginal community, and out of respect for the traditional owners and custodians of the land. 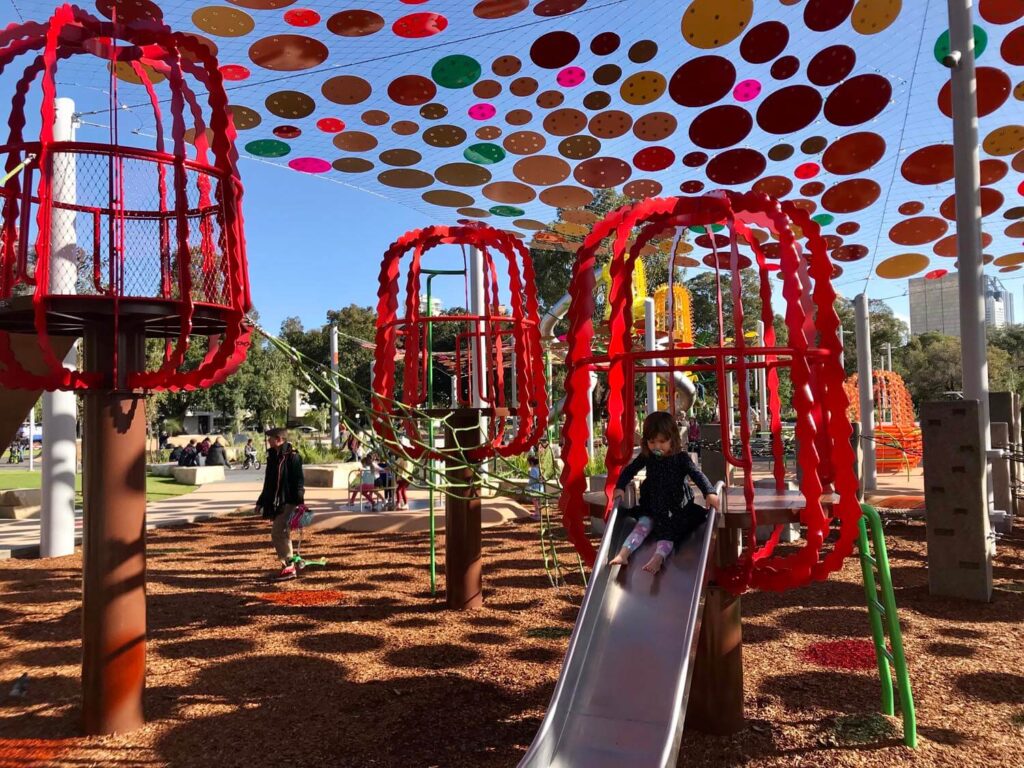 What are the Different Play Areas in the New Wellington Square Playground?

There are many different play areas, both modern and traditional, in the Wellington Square Playground.  We will quickly run through the different sections here!

This younger kids’ area (colored red) features a flower theme but lots of climbing.  Because of that, it is known as the “the Rock Escarpment”.   The rock formations have been designed to reflect the landforms of Western Australia.  The bonus is that a gradual path leads to the top of the escarpment meaning children of all ages and abilities can use the area.  It also has more traditional things like an old-fashioned spinning playground toy – as well as basic swings.

There are embankment slides in the Red Banksia area that means that wheelchairs have access to the top of the playground.  The banksias in this area are inspired by the Acorn Banksia which grows from Shark Bay to the Great Southern and the Firewood Banksia which grows on the Swan Coastal Plain.

Older kid’s playground has some seriously high tube slides, inspired by a banksia which is the center of the climbing tower.  The older kid’s area is surrounded by many climbing structures and bars, which I later learned were part of a parkour element to the playground.

**  Don’t forget that metal slides can be hot in the middle of a Perth summer.  Check them for heat before letting the kids slide down.  **

I’ve only heard of my kids talking about ‘hard-core parkour’ in Minecraft.  So I was excited to learn that there are parkour elements to the new Wellington Square Playground.  At first, you don’t recognize them as being a parkour course but later on, you can see all the different jumping towers, climbing bars, and balancing ropes that would be awesome for parkour.

Who would have thought that monkey bars could be part of a parkour element?  In case you are like me and don’t know what parkour is – it is the sport of traversing obstacles in a man-made or natural environment through the use of running, jumping, climbing, in order to get from point a to point b in the most efficient way!

The pump track is called ‘river flow’ and a play area for wheeled devices (so bikes could share with scooters) and it represents the movement and flow of the Derbarl Yerrigan (the Swan River).  There are some good berms and banked turns on there for kids who are still learning!

Parents of Perth kids might recall when the first flying foxes were installed around playgrounds in Perth about five years ago!  (I can’t remember exactly!)  There would be huge queues at the flying fox as the kids couldn’t get enough of it.   This is not the case at the new Wellington Square Playground.  It looks like Perth kids might be used to them now.  Also, my kid’s first report was that “it’s not a very high or long flying fox”.  They are right – it is not extremely long or high compared to some of the others we have been on around Perth (and Western Australia).

Trampolines, albeit little one’s side by side, are a new addition to Perth playgrounds.  I’ve not seen them in public playgrounds like this.

I love the inclusion of basketball and netball courts in the new Wellington Square Playground area.  As my kids have got older, I realize how much they enjoy this kind of outdoor activity (as opposed to playgrounds).  There is a full-court and half-court for basketball, and netball hoops, and table tennis as well.  If your kids would prefer to kick footy or play soccer there is a massive green grassed area that is perfect for running around.

As we visited in mid-winter, we didn’t see the water playground in operation.  However, the kids can’t wait to return in warmer weather.  It looks like it would allow lots of play and surprises too.

Of course, don’t forget to pack a change of clothes as kids always end up wet at water playgrounds

There are toilets at both Wellington Street ends of the Koolanga Koolanga Waabiny -Wellington Square recreation area.  They are electronic toilets and my kids loved using them.

There is one electric barbeque in the kid’s playground area, and other ones at the basketball hoops.  Also, there is a good amount of seating for tired parents and drinking fountains as well.

Dogs are not permitted in the playground area.  However, the rest of the map indicates that dogs are welcome in the grassed areas.  There is also an off-leash dog park.

The Koolanga Koolanga Waabiny -Wellington Square is located in East Perth bounded by Wellington Street, Barrett Street, and Wittenoom.  Hill Street makes the final side of the square and the playground is conveniently just 1.5 blocks from the Perth Mint.

If you are looking to combine a Perth Mint visit with some fun play afterward we would park on Hill Street and go to the Mint first.  For more information on the Perth Mint, go to Things to do in Perth with Kids.

If you are looking for parking near Wellington Square there are spaces along all the streets that bound the playground.  It looked very full as we drove along Wellington Street towards the WACA.  There are traffic lights on Bennett Street and we turned left and found a great carpark right near the playground.  You need to pay for parking.

Is the Wellington Square Playground the best in Perth?

We visited on a sunny winter’s day during the July school holidays with kids aged 11, 7, and 2.5 on the day we visited!  Given the playground opened at the end of April, there were definitely loads of families testing it out for the first time.  It was pretty busy in some parts and felt full and crammed.  My kids tend not to like to get into climbing towers when there are loads of other kids.  They noticed a pinch point in the yellow banksia (taller kid’s playground) and said they wouldn’t give that one a go.

Miss 11, not having friends around, didn’t find any parts of the playground very interesting.  Although she did love the automated toilets!

The shade cloths – designed to be the night skies – are visually the most stunning part of the playground.  Little Miss 2.5 spent a lot of time gazing up at them and saying they were pretty.  I am not sure what they would be like in terms of creating shade in summer – I suppose time will tell.

As a mother, I loved that there were old-fashioned swings.  These are such a winner with smaller kids, like 2-year-olds.  However, as there were only 4 they were all occupied for the entire time we were there.  This seemed like an oversight

I liked that there was a HUGE variety of things to do and well spread out over the age range of all my kids.  The kids decided they’d like to go back on a weekday when it wasn’t so busy and with their scooters or when they could try out the water playground.

Other East Perth Playgrounds and Parks

While we are reviewing the Koolanga Koolanga Waabiny -Wellington Square we thought that we would share some ideas for other Perth parks in the area.  Don’t forget to look at our full review at Perth Playgrounds And Parks In Perth.

The lovely Queen’s Gardens are one of my favorite places for relaxation in the city.  They are large – 3.3-hectares and built on the area of former brickworks.  It is immediately adjacent to the WACA, which is across the road along Hale Street.

Dating from 1899 the Gardens were named Queens Gardens for Queen Victoria in honor of her Diamond Jubilee.  While there is no playground for the kids, we like to walk around the lake, enjoy the ducks and ducklings and crossing the pretty bridges.  There is a Peter Pan statue in the center of the Queens Gardens, which my mum says I loved when I was a child!

With a lovely view of the Matagarup Bridge and the Optus Stadium, the Mardalup Park is another option if you are looking for some greenery and fresh air in the East Perth area.  It has a small, standard playground and a nice grassed area for a picnic.

As I’ve shared, the jury is out on whether the Koolanga Koolanga Waabiny -Wellington Square playground is the best playground in Perth.  I can say that it is thoughtfully designed and very, very beautiful aesthetically.  However, the playability of the playground is what is important to kids, and we’re going to make a second visit before we can give a final decision!

Perth Zoo is the smallest of the Australian government-run zoos.  However, this means that you can get around and see quite a lot in a short amount of time.  Ok, we are biased, but we think that a visit to Perth Zoo is...

If there is one place that is synonymous with Margaret river luxury accommodation it’s the Pullman Bunker Bay Resort.  This is truly a world-class luxury resort, having received a number of prestigious awards.  If you...

Best things to do in Margaret River in Winter

The Best Restaurants In Busselton

Visit A Busselton Winery And The Best Busselton Breweries!