Top 9 Things For Kids In The Goldfields

Last Updated on August 30, 2020 by worldoftravelswithkids

Top 9 Things For Kids In The Goldfields

Well, pretend to drive a truck.  This hits our number 1 for kids in the Goldfields because it was both interactive and educational for all the family, from the littlest through to dad.

Hannan’s North Tourist Mine is filled with lots of old machinery which is awesome for kids to climb into, pull levers and press buttons!  The ability to climb on old machinery and then into a massive Haulpak was a total winner for everyone in the family! 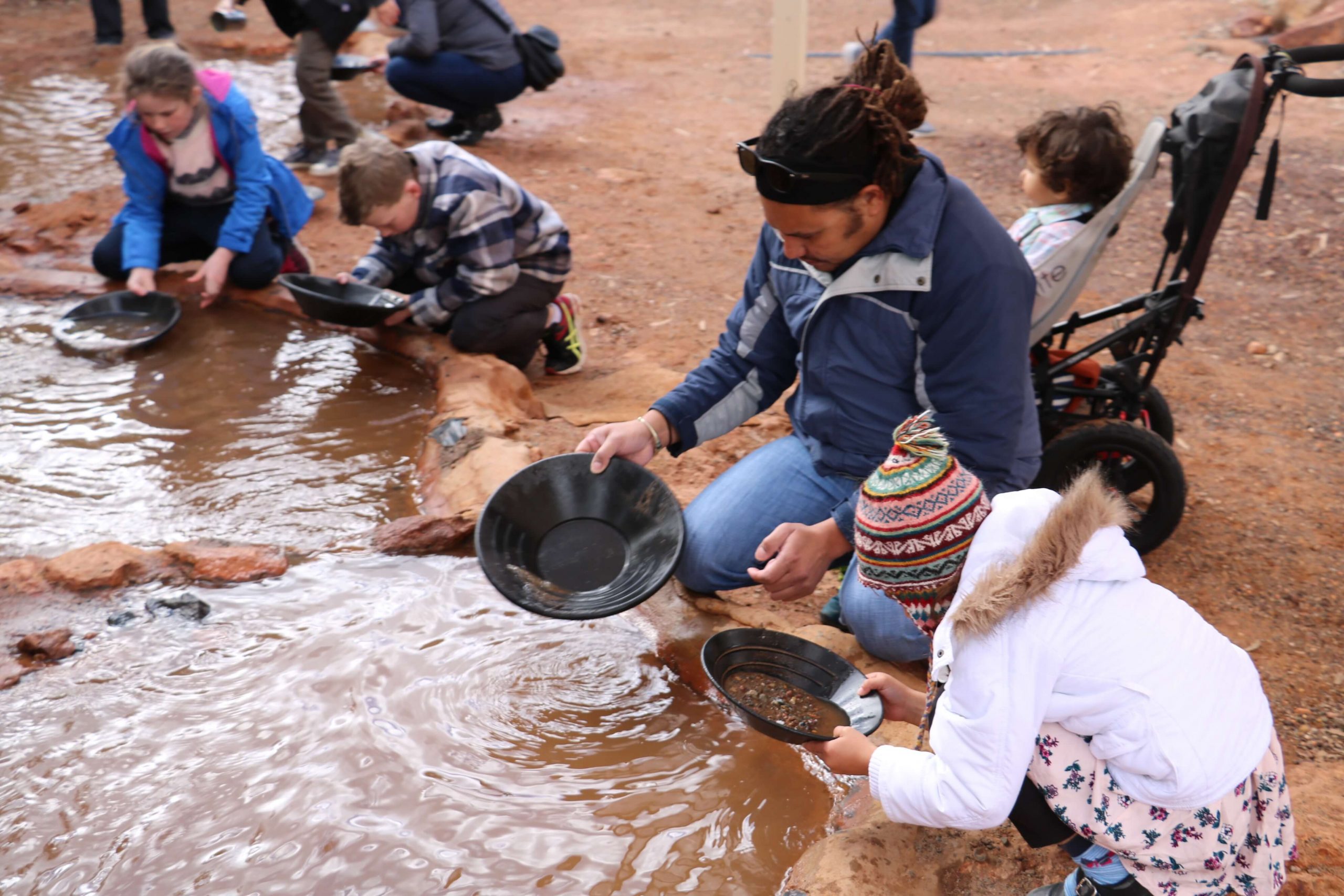 Pan For Gold And Play 2 UP

Our visit to Hannan’s tourist mine started out slowly (it was the middle of winter!).  Even Miss 6 with her normal excitement for things historical found it the miners tents and fire hard to warm her up!  In different weather, the gold panning would have been lots of fun.  However, the water was cold and we had no luck (I wonder if we would have had the perseverance to be prospectors).

Miss M found some of the mannequins, especially one of Paddy Hannan, spooky and scary.  It was a game of 2UP that got us smiling! Great for math and something you can play at home.

Two-up is a traditional Australian gambling game, involving someone throwing two coins into the air. Players gamble on whether the coins will fall with both heads (obverse) up, both tails (reverse) up, or with one coin a head and one a tail (known as “odds”).

Kalgoorlie’s Super Pit can apparently be seen from space and until 2016 was Australia’s largest open pit gold mine.  It has absorbed what was Kalgoorlie’s famous Golden Mile and is over 3.5 kilometers long and 1.5 kilometers wide.

It is currently around 400 meters deep.  The massive Haulpaks are like ants – we watched for some time as the massive machines would fill up the trucks which would then head up the steep walls of the mine.  Mumma traveler refrained at this point from expressing her sadness about the massive scar on the earth and the mining industry in general.

Fossick For Treasures In Ghost Towns

The Goldfields Australia is littered with ghost towns and has a rich history that is well promoted and documented through radio channels, brochures, and podcasts.  However, we quickly discovered that given much of the history is not visual it was hard to capture the young kid’s attention for more than a few minutes.  They loved the old buildings at the ghost town at Gwalia, located outside Leonora Western Australia, and we played there for a good hour.

Outside of Laverton Western Australia, the kids were excited to stumble upon an old mine site with a pile of rusted bits and pieces.  There was also plenty of white quartz, which is the rock that contains gold.  We took home a pocketful of treasure.

We would have loved to head to the town at Kookynie and meet the racehorse that lives in the pub but ran out of time. It definitely sounds like something that would be great to schedule in.

With a pretty flat landscape as far as the eye can see, huge skies are a feature of the Goldfields Australia.  The skies are even better at sunset.  When we realized just how magnificent the sunsets were we headed off for a fossick (point #4) each night around sunset.

Even though we visited prior to the famous wildflower season, there were also a rich variety of flowers and plants.  This was taken near our campsite at Laverton, Western Australia.

This is a must see place to visit with small kids in the Goldfields!  We realized that we should have visited on our first day in Kalgoorlie because there is only so much history small kids can absorb!

We had a great time at Hammond Park as a new/innovative park with lots of different activities.  There is a small Bavarian Castle and also lots of birds which show a wide variety of colors in the native Australian parrots. Pink and grey galahs, sulfur-crested cockatoos, and corellas, plus much more.  It was really fun for the kids to look at.

We enjoyed Plum Café.  With simple ham and cheese toasted sandwiches and sausages in bread, it’s the good old fashioned homey food!  With kids playing, hot coffee, cute cartoons and complete with blankets to wrap around your legs on cold winter days it was a chilled way to spend a couple of hours and really changed the pace of the holiday for us.

With wide streets and lots of pubs, Kalgoorlie is super atmospheric.  You really can feel the bygone era.  You also get a feel for a certain brashness and vitality of the current mining industry.

There are dirty cars covered with red dirt on the streets, proudly flying aerials and the flag of bush travel, a dirty rag on a tall pole.  High Vis clothing is de rigeur or just what you wear on the street and without a doubt, it’s a frontier town.  Sunset photo opportunities abound in Kalgoorlie city itself, especially shots of the old pubs.

Lake Ballard, the home of the Inside Australia Exhibit by Antony Gormley was out of this world and well worth a visit.  We shared our Tips to Visit the Lake Ballard Statues with kids.

Also, big thumbs up to Menzies playground.  It is right on the highway as you come into Menzies and appeared a popular spot for parents to take a break.  Lake Ballard is accessible from Menzies and you could also camp at Leonora for the night if you wanted.

Walk Along The Water Pipeline

The Goldfields Water Scheme is quite literally a lifeline of water that runs from Perth to Kalgoorlie.  There is a great interpretation center at Mt. Charlotte which, incidentally, also offers an excellent view over Kalgoorlie.  This gave us a great overview of the history of the pipeline, and its amazing successes, which was a great thing to have on board as we traveled back down the road.  The pipeline is ever present as you travel the 600km back to Perth!

What’s The Best Age To Visit The Goldfields With Kids

Given the rich history (and sometimes adult themes of the rocking Goldfields history) we’d potentially recommend this trip for kids that were slightly older than 2. 5 and 6.  Probably an 8 or 10-year-old would be able to envisage things a little better than a 6-year-old.  Also, there was a lot of driving involved.  6 hours from Perth) so we had to stop plenty of times in order to keep the kids entertained.

Where Did We Stay In Kalgoorlie?


We stayed at the Rydges Kalgoorlie as full paying guests.  They upgraded us to the Hannan Suite which was super spacious with two bedrooms, a kitchen, and living area.  Super soft beds, lots of nice touches – everything you would expect for a 4 start hotel.  The best part was that it had a spa.  Outside some of the worst winter weather of the year. So we were appreciative of the extra space, and spa to warm up in.

Room service from their restaurant was top notch and we highly recommend the desserts. They have an outdoor swimming pool and a shared spa area as well for those visiting in summer.  Rydges Kalgoorlie definitely gets a thumbs up for a good Kalgoorlie family hotel.  Check here for current rates to stay at Rydges Kalgoorlie. 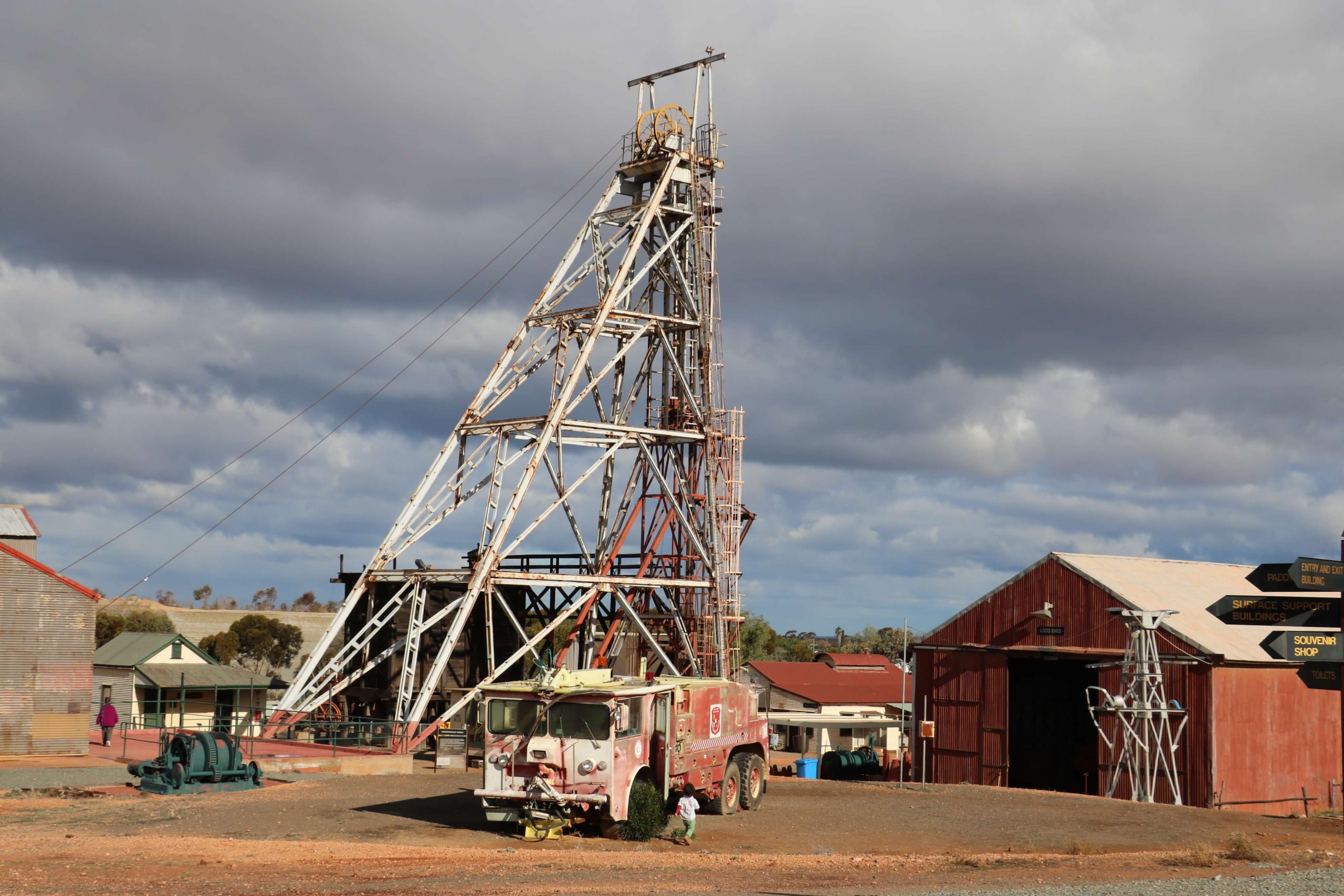 Take a look at this page for a complete list of places to stay in Kalgoorlie.

Here are some of our favorite Western Australia guidebooks.  They are great for planning and also to carry with you on your adventures.  Click each one to check the current prices.

Additionally if you want to read more about the Goldfields Australia, take a look at our recomendations below. 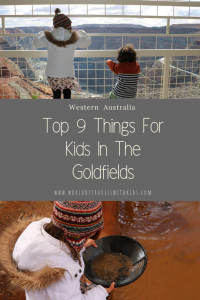 If you are planning to head to the Stirling Ranges you are in big for a big treat – these are a really special place to discover Western Australia’s remoteness.  The Stirling Range National Park also...

Are you looking for the best pet friendly accommodation in Margaret River?  Then join the club, we have been looking as well!  The three years since we got our beloved Beaglier puppy have been filled with joy.  She is...

Quinninup Falls is one of Western Australia’s most Insta-worthy and popular waterfalls!  Here we cover everything you need to know to do the Quinninup Falls hike.  As a bonus, we have thrown in how to get to the nearby...

A Complete Guide To The Margaret River Caves

A Guide To The Best Waterfalls Perth