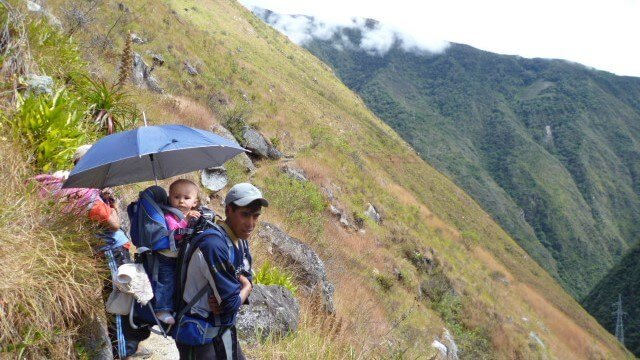 The Short Inca Trail With Kids!

Last Updated on February 17, 2021 by Travels with Kids

Permits sell out months well ahead (think –  6 months!)  so we made the decision with a good deal of bravado: even though we spent a lot of time outdoors, we’d never taken our baby on a multi-day camping trip.  Still, it was the peak of the high (dry) season, she was acclimatized to the altitude, and we’d paid for an extra porter to carry the superfluous paraphernalia that a baby inexplicably accumulates. 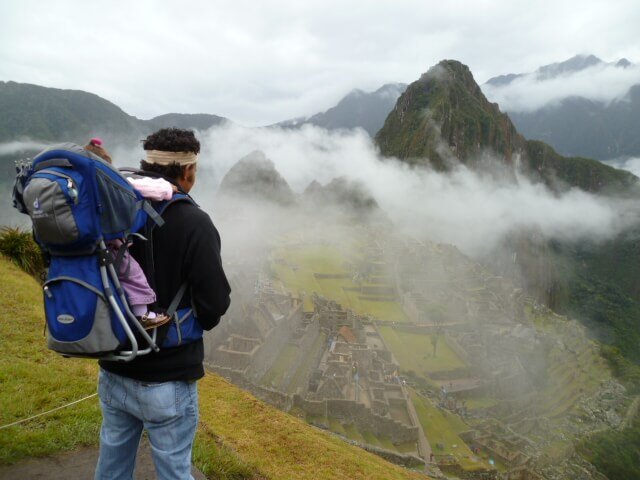 How We Trekked The Inca Trail With Kids

A couple of days before the trek Miss M. developed a serious cold, and it began to pour with rain – right in the middle of the dry season!  At this point, I accepted that our Inca Trail with kids trek was not going to happen!  With both a sick baby and copious rain, the signs were against us.

The Short Inca Trail Trek is just that, a one-day hike that joins the last day of the Inca Trail and is ideal for people who are short of time, who don’t like to camp, or who lack the desire to do a longer trek.

As we arrived at our starting point my first reaction was that there were very few other groups doing the route that day; even though it was the middle of the high season.  I expected it to be packed out.  It’s the “easy route”, after all!  In fact, there was none of the hustle and bustle of the entry to the Classic Inca Trail. There were just us, our guide, and the porters who were carrying our baby and her extra things.  It was a great experience hiking the Short Inca Trail with kids.

On cue, the rain stopped and revealed the triangular walls of the ruins at Chachabamba.  This Inca site was discovered in 1940,  almost thirty years after Hiram Bingham found Machu Picchu.  Its architectural style and intricate stonework suggest that this was an important religious site, in addition to its secondary function as a gatehouse guarding the entrance to Machu Picchu.

From here, we began to climb.  Having always thought that this was the ‘easy route’ to Machu Picchu, I suddenly realized that there was a lot of gentle but consistent climbing.  Despite having trekked extensively in the Andes, after a short while, my aching muscles painfully reminded me that I hadn’t hit the trail in the 12 months since my daughter’s birth – nor even in the final trimester of pregnancy!  I began to struggle, puffing, and taking lots of rests – this was what it was like to be out of shape and then do a trek?!  Not a lot of fun!

A reminder, even if you are going to do a one-day hike, you need to have a decent level of fitness!

Luckily for me, my daughter needed frequent breaks from the baby backpack and we stopped often to admire the views of the valley below us, which was alternately bathed in sunshine and misted over with colorful clouds shifting over the mountains.

Despite Miss M’s lingering cold and my aching legs, there was certainly something magical about breastfeeding her on the trail.  There were spectacular panoramas all about.

We are often asked by parents of babies and toddlers about trekking with their babies, and we always recommend that you allow a lot of extra time.  At just 12 months Miss M wasn’t yet walking and so a few crawls and scoots around on the dirt at regular intervals kept her content.  A few weeks later, when she started to walk our Inca Trek with kids adventure might have been very different!  (Keep this in mind as you need to book the permits so far in advance!)

One way that the Incas adapted to the steepness of the Andes was by building steps: something that distinguishes the Inca trail from the alternative trails around Cusco are the endless steps!  In between panoramic views, we passed a beautiful cascading waterfall.  This was a lovely surprise from Mother Nature in the midst of the mountains.

Maybe it’s because we were so slow, but we only encountered two groups all day while on the trail.  Despite being so near to Machu Picchu and the heavily trafficked Inca trail, we felt that we were alone in the mountains.  We were thrilled by the experience!

After some 6 hours of climbing uphill, we arrived at Wiñay Wayna.  Perhaps it is the most gorgeous set of ruins along the whole Inca Trail.  The name Wiñay Wayna which in Quechua means “Eternal Youth,” or “Forever Young”.  It was given to the ruins by the eminent Peruvian archaeologist, Dr. Julio C. Tello.  Considered by many to be the most beautiful of the sites on the Inca Trail.  It was a wonderful highlight of our trek.

With the frequent stops for the baby, we were some 2 hours slower than the average trekker.  We still had a couple of hours’ walk through the moist cloud forest.  At this point, the terrain was blessedly flat and cool, we felt as if we were walking in the high jungle.  We arrived at the final massive stairs of Inti Punku, which were once a control gate for those who entered and exited the Sanctuary.  As the entrance to Machu Picchu, it is one of the most important features of the site.  As the name suggests, it’s devoted to Inti, the sun-god.

At other times when we’ve done the Inca Trail, Inti Punku had been filled with hundreds of tourists moving eagerly to catch their first glimpse of Machu Picchu.  Instead, as we were arriving very late in the day, we were the only people at Inti Punku.  It was a special moment to arrive at a place normally so inundated with tourists and yet enjoy it in solitude.  As we descended the final stretch to Machu Picchu, we saw that there were few people at the site.  We had unobstructed views: it was a unique feeling.

After exploring the ruins for a few hours, we made the last bus down. Our 12-month-old looked exhausted by the day’s trek.  It was amazing to get a hot shower and then to sink into a soft bed.

As we hit the sack, we were filled with gratitude.  Despite having been on the Inca Trail for just a day, we experienced solitude, isolated Inca ruins, and an indescribable sense of awe and accomplishment.  We had trekked into Machu Picchu on foot, as a family.

Want To Do The Inca Trail Trek With A Baby

First up you MUST read our blog post Trekking with a Toddler in the Andes.

Secondly, you are going to need a proper trekking baby carrier.  We have used a Deuter 3 Kid Comfort for years.  In addition, you need to buy the Kid Comfort Sun Protection separately.  We love everything about this carrier and highly recommend it.  Other baby carriers that we would consider for this kind of trek are an Osprey Kid Carrier or Mac Pac Carrier.  You can see pictures here:

Thirdly, keep in mind that you can hire a porter for children up to 20kg, but over 20kg you will need to carry them yourself, due to porter laws!!!

Thinking About Trekking The Inca Trail Trek With A Baby

You will need an authorized Inca Trail trek operator to buy your permit (by law) and assist with logistics.  Apus Peru Adventure Travel Specialists have plenty of experience in offering treks with young people!

This post was originally published on the Apus Peru Blog,  and has been adapted by the author, Ariana Svenson, coincidentally a CoFounder of Apus Peru!

We’ve traveled with Lonely Planet for over 20 years! For unbiased and detailed advice, they are our trusted guide-book.  Even in this digital age, you can’t go past them for maps and info on the go.  Take a Look.

Check Out Our Other Machu Picchu And Trekking With Kids Posts

Should I Take My Children Trekking in Peru

Like it> Pin It> The Short Inca Trail With Baby! 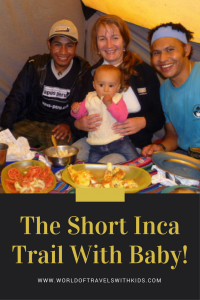 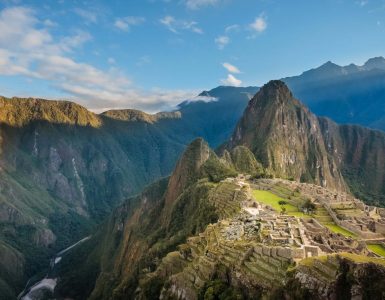 Alpaca vs llama is a million-dollar question!  We are going to go through the key things to look for when evaluating the difference between a llama and alpaca.  They both have similarities but are also very different...

The History of the Inca Empire and the story of the Inca civilization is a fascinating one.  There is a lot of complexity and also doubt about some facts.  What I have done here is collate the most interesting facts...

Best Books About Peru For Children

Best Things to do in the Sacred Valley Peru With Kids

Trekking With Llamas And Kids In Peru