Eastern Australia is a fantastic and very popular family travel destination.  It includes the states of Victoria, Queensland, and New South Wales. Eastern Australia is home to 81% of Australia’s total population in well-known cities such as Sydney, Melbourne, and Brisbane.  Eastern Australia spans such a large area but by and large the climate ranges from sub-tropical (in the north and middle) and oceanic (in the south).  Notable family destination’s in Eastern Australia include Sydney, the Daintree Rainforest Forest, The Great Barrier Reef, The Gold Coast, Brisbane, Melbourne, Byron Bay, Fraser Island, Canberra, and the list goes on and on.

We rate Eastern Australia 3/5 for Kids

What is the best time of year to visit Eastern Australia?

The high season for travel in the majority of Eastern Australia (excluding the far North) is December through February.  The weather varies from hot and humid in the north to dry and warm further south.  Because Australia is in the Southern Hemisphere this time is considered “summertime”.  However with high season brings higher prices but perfect weather for sightseeing and beach going.  However, the exception is if you are visiting The Great Barrier Reef.  The best time to visit the reef is in June through August when visibility and weather in the far north is at its’ best.

When should I avoid visiting Eastern Australia?

It is generally advisable to avoid the bigger cities during the period around New Years Eve, especially Sydney where crowds and prices are high!

Eastern Australia festivals and events to plan around

January – January 26th is “Australia Day” or Australia’s birthday.  Many people celebrate with picnics, barbecues, and fireworks.  The Australian Open is also held in late January.

February – Mardi Gras is held in Sydney at the end of February and into March.  Also Tropfest, the worlds largest film festival, is held in various cities in February.  The Brisbane Street Art Festival also takes place in February.

May – May has many events and activities including the Noose Food & Wine Festival, Sydney Writer’s Festival, and Port Douglas Carnival.  May also kicks off the start of whale-watching season in South East Coast.

July – The Melbourne International Film Festival is held in July, and at the other extreme is the Mareeba Rodeo in Far North Queensland.

August – The main festival in August is by far the Cairns Festival. It is a culture and arts festival with music, dancing, theater, and lots of art.

November – The Melbourne Cup is held on the first Tuesday in November; billed as one of the world’s top horse racing spectacles.

December – Sydney to Hobart Yacht Race is one of the worlds most popular yacht races and is held every December.  Also, the world famous Sydney Harbour Fireworks display on New Years Eve.

What about New Zealand?

Ok,  New Zealand is definately not Eastern Australia…! However, if you are that close, why not discover this gorgeous adventure destination – check out the best of New Zealand.

Our most popular blogs – Eastern Australia 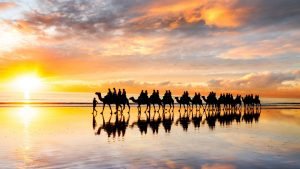 If you are looking for the best family holidays Australia then look no further!  We know that the land down ...
Read More

What were our most remarkable family travel experiences for 2017? As I sit down to write this, I reflect on ...
Read More

Things To Do In Sydney For Kids

While there are many things to do in Sydney for kids, on our most recent trip we stayed around ONLY ...
Read More

We often talk about our dreams of raising global citizens; Womadelaide with kids advances that dream over one amazing long ...
Read More