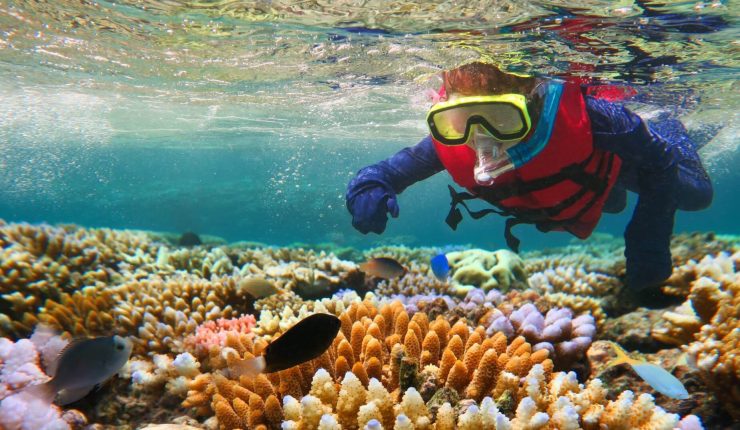 Last Updated on April 12, 2021 by worldoftravelswithkids

Quick Facts About The Great Barrier Reef For Kids

Here is a top 10 list about the Great Barrier Reef for kids, including its most unique features:

What Exactly IS the Great Barrier Reef

You might think the Great Barrier Reef is just an inanimate home for other animals, but it is actually a living thing itself!

Fun Fact: The Great Barrier Reef is not a single reef. The whole coral reef system is made up of 2900 individual reefs and 900 islands.  Coral reefs fall into five types: fringing reefs, ribbon reefs, barrier reefs, patch reefs, and platform reefs.  Only some of the Great Barrier Reef is actually barrier reefs; the rest are a combination of fringing, platform, and patch reefs.

Reefs form as individual coral builds up on top of each other.  Here is an interesting tidbit about the Great Barrier Reef for kids: even though they are hard as rocks, corals are actually alive!  They are made up of tiny marine animals called coral polyps.  Coral polyps take natural minerals from the seawater to build themselves protective skeletons made of calcium carbonate.  These hard skeletons protect the delicate polyps, and they stay inside their skeletons during most of the day.

Where Is The Great Barrier Reef Located

The Great Barrier Reef is located in the Coral Sea.  This is about 1632 km (1014 mi) off the coast of Queensland, Australia.  It is so big, though, that actually the reef starts at the Cape York Peninsula in the North, and extends all the way down to Bundaberg in the South.

Great Barrier Reef Facts For Kids: What’s So Special About It

Condé Nast Traveller named the Great Barrier Reef one of the 7 Wonders of the World in 2018.  It also received status as a UNESCO World Heritage Site in 1981, the first coral reef system to receive such an honor.

To be a World Heritage Site, a place also needs to meet at least one of 10 criteria; the Great Barrier Reef fulfilled all four natural criteria:

If those aren’t some amazing Great Barrier Reef facts for kids, I don’t know what are!

The Great Barrier Reef Marine Park is a huge expanse, home to a unique range of ecological communities, habitats, and species.  This makes it one of the most complex natural ecosystems in the world.

Great Barrier Reef Information For Kids: How Old Is It

How do scientists determine the age of the Great Barrier Reef? Well, as with any corals, what they do is drill into the coral structures to get core samples.  These core samples are big cylinders of limestone.  Limestone, or calcium carbonate, is what coral skeletons are made of.

As they grow, corals leave behind growth layers – just like tree rings.  The oldest layer will be at the bottom.  Scientists can measure the age of a growth layer by comparing the ratio of uranium to thorium, two naturally occurring elements.  Since scientists know how quickly uranium decays into thorium, by measuring the ratio they can estimate how much time has passed. 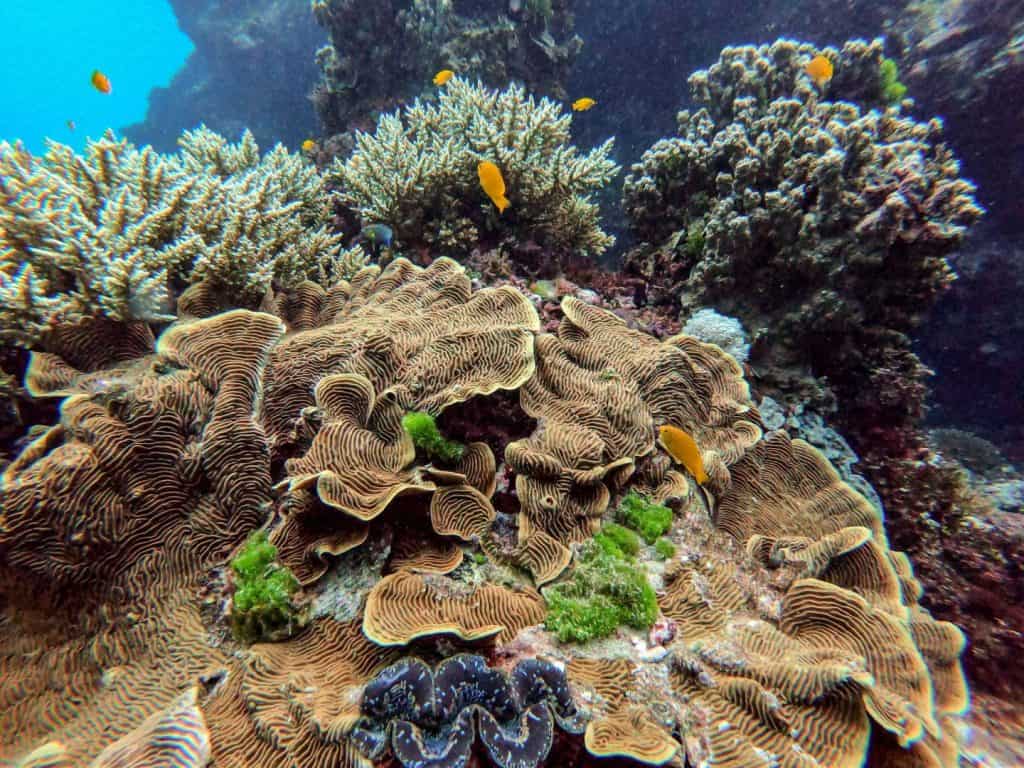 How Big Is The Great Barrier Reef Marine Park

Very big!  For one thing, it is the biggest structure made by living organisms in the whole world.

What does that really mean?  Here are some comparisons to help you imagine how big the Great Barrier Reef is:

Why Is It Called The Great Barrier Reef

Great Barrier Reef Information For Kids: Who Discovered It

Torres Strait Islanders and Aboriginal people have known about and lived around the Great Barrier Reef for over 60,000 years.  However, from a European perspective, it was “discovered” by the English explorer and naval officer, Captain James Cook, whose ship crashed into the reef in 1770.

The Great Barrier Reef that we can visit today probably started forming after the last Ice Age, some 20,000 years ago.  The land underneath the current reef system might be remnants of volcanoes or older reefs.

Like all coral reefs, the Great Barrier Reef was formed by coral polyps building their limestone skeletons on top of each other.  The first coral polyps attached themselves to the continental shelf – the underwater land that represents the outer limit of the island of Australia.

You can also find a wide array of giant clams, seahorses, nudibranchs, microscopic plankton and bryozoans, and more.  The smallest fish found on the reef is the Stout Infant Fish – just 7mm long! By comparison, the largest is the whale shark, which can grow up to 12m in length.

While there are many beautiful sea creatures to admire, the reef is also home to some of the ocean’s most deadly animals, including the Blue Ringed Octopus, Box Jellyfish, and Stone Fish.

The whole marine park boasts 14 marine ecosystems, including seagrass, coral reefs, coastline, lagoon floors, estuaries, open water, islands, freshwater wetlands, and more.  All of these ecosystems are vital to the functioning of the reef.

The orange and white clownfish we all know and love from the Pixar film, Finding Nemo, is actually just ONE of about 30 species of clownfish that live in coral reefs around the world.

The Ocellaris clownfish, also known as the False Clownfish, is likely the most well-known species from the Anemone Fish family.  Their striking colors – ranging from orange and white to yellow and purple – make them a favorite while snorkeling, and are also popular for aquariums.

How Much Coral Is In The Great Barrier Reef

An interesting fact about the Great Barrier Reef for kids: there are around 400 species of both soft and hard corals found there.  The longest-living coral species seems to be the boulder corals, which have a lifespan of about 1000 years!  Staghorn corals grow the tallest – up to 30 cm per year!

Coral reefs themselves can grow up to 490 feet in height.  Corals need water to survive, but they also need sunlight.  This is why they prefer to grow in warm, shallow waters.  You won’t find corals growing above sea level, but you also won’t find them growing where the water is too deep, either.

Who Owns The Great Barrier Reef

There are more than 70 traditional owner groups among Aboriginal Australians and Torres Strait Islanders.  Their relationship with the reef goes back some 60,000 years.  The Great Barrier Reef is very important to their culture, traditions, and spiritual beliefs.  They are considered the traditional owners.

Is the Great Barrier Reef Dying

The Great Barrier Reef is fairly resilient and has survived, in one form or another, for millions of years.  However, it is currently facing a whole host of serious threats.  Everything from climate change and warming ocean temperatures to pollution and invasive species. According to a new study, the Great Barrier Reef has lost 50% of its corals since 1995.

What Are The Major Threats To The Great Barrier Reef

The most serious threats to the reef are climate change, pollution, over-fishing, and crown-of-thorns starfish.

Cyclones, oil spills, and shipping are additional issues having an adverse effect on coral reef health.  Also pesticides from farming, sediment runoff, and eutrophication – that’s when excessive algae-growth in a body of water reduces the amount of oxygen in the water, making it hard for other plants and animals to survive.

What Is Coral Bleaching

Coral bleaching is when coral polyps expel the tiny algae that live inside their tissues, causing the coral to turn white.  These algae are crucial to the health of coral polyps, providing up to 90% of their energy.  A bleaching event does not immediately kill the coral, but it does put them under severe stress.  They are at a greater risk of dying, especially if they remain under stress for a long time.

What causes coral bleaching?  In a word – stress.  This includes an increase in water temperature, extreme low tides, excess sun exposure, agricultural runoff, and pollution.  All of these events create a stressful environment for the coral and cause it to bleach.

Is global sea warming a significant contributing factor to the coral bleaching occurring in the Great Barrier Reef?  Yes, definitely.

Crown-of-thorns starfish are large (up to 1m in size!) starfish covered in venomous spines.  They are normally an important part of a healthy reef system.  They feed on faster-growing corals, giving slower-growing species a chance to catch up, thus adding to the diversity of the reef.  But sometimes there are big outbreaks of crown-of-thorns starfish and this can cause big problems for coral reefs, as they devour the coral.

What causes an outbreak of crown-of-thorns starfish?  Agricultural runoff can create a nutrient imbalance that favors the starfish.  Overfishing is another problem when you remove the starfish’s natural predators.

Can I Visit The Great Barrier Reef Without Damaging It

Here are some ways you can visit the Great Barrier Reef without damaging it.

Stay At An Eco Resort

There are a number of eco-lodges near the Great Barrier Reef.  Many of which are also top-notch research facilities.  In addition to low-impact accommodations, many of these lodges offer hands-on learning on their tours. Here are just a few:

After seeing the Great Barrier Reef up close, you’ll probably feel even more inspired to protect it.

Head to Townsville to visit Reef HQ, the largest living coral reef aquarium in the world!  It is chockablock full of amazing Great Barrier Reef information for kids, the reef’s complicated biodiversity, threats – and what scientists are doing to protect it.

Download their Eye on the Reef app to take pictures of any threats you see as you visit the Reef – from coral bleaching to the crown-of-thorns starfish.  Scientists at Reef HQ use data gathered through the app to map out these and other threats, helping them stay on top of reef conservation.

Get Active In Reef Conservation

“Citizen science” is actually an important part of scientific research in almost any field.  It helps scientists and researchers gather as much data as possible to feed into their predictive models.  There are many ways to get involved with conservation science on the Great Barrier Reef.

What Can I Do To Help Save The Great Barrier Reef

It might seem like too big a problem for just one person to tackle, but there are actually lots of things you can do to help protect coral reefs from dying out:

How To Visit The Great Barrier Reef

Facts About The Great Barrier Reef For Kids: A Final Thought

The Great Barrier is truly one of the most fascinating natural environments on earth.  Teeming with life, there is so much great information for kids to learn about ecosystems, marine life, and more. Whether you take a virtual tour from home or actually go see this place in person, we invite you to travel the Great Barrier Reef with your kids!

Like It> Pin It> Great Barrier Reef Facts For Kids

Sloths have hit the big time in popular culture.  Everywhere you look there are sloths and more sloths.  On social media, and in toy stores.  In fact, if you have kids there is a good chance you’ve bought a toy sloth in...