Kids’ facts on Australia are as varied and colorful as this beautiful country herself.  To put it simply, Australia is a massive place!

Australia Is The World’s 6th Largest Country By Area

Australia is sixth in size behind Russia, Canada, the United States, China, and Brazil.

However, Australia is the only country that is also a continent.  For this reason it’s also known as the island continent.  It must be pointed out, that about 20% of Australia is desert (known in Australia as ‘the outback’) and only about 60% considered habitable, as the rest is too dry for human habitation.

Australia Is Not A Densely Populated Country

In comparison to Australia being huge, it ranks #55 in the world population rank.  The population density in Australia is 3 per Km2 (9 people per mi2).

And, as much of Australia is very dry, more than 80% of Australians live within 100 kilometers (how many miles) of the coastal areas making Australia one of the world’s most urbanized coastal dwelling populations.

As Australia is so isolated, over thousands of years the plants and animals found on the Australian continent are extremely unique.  Many of the fauna and flora are found nowhere else on the planet!

We’ll share some more animal fun facts for kids about Australia.  However, in brief, these animals include the emu, koala, kangaroo, and platypus. For instance, did you know koalas are not really bears? Learn more about koalas in our Interesting Facts For Kids About Koalas. I bet you would also be blown away by just how many species of kangaroos Australia actually has.  Read all out in in our Facts About Kangaroos For Kids.

Australia Has The Most Poisonous Animals In The World

One of the most well-known Australian facts for kids is that there are a lot of venomous animals on this island continent.

For example, there are many deadly snakes, scorpions as well as 40 species of funnel-web spiders.  Not to mention the spider we dislike most around our home – the Redback Spider!  In Western Australia we live near the dangerous Tiger Snake and the kids are very aware they need to steer clear!

It Also Has Some Deadly Marine Creatures

Oh, and if you thought that you were safe in the sea – think again!  The Box Jellyfish and the Blue Ringed Octopus are amongst the most deadly marine creatures in the world.  Not to mention the most venomous fish in the world, the Stonefish, which lurk on the shore!

In Australia Watch Out For The Sharks And Crocodiles

Australia has a terrible reputation for having man-eating sharks and crocodiles on its shore.  An Australian facts for kids is that they are not as deadly as the popular media would make out.  In fact, there is about 1 shark death each year in Australia and 1 crocodile death every second year.  That is, it is far more deadly to drive – there are over 1000 road deaths each year in Australia.

Australia Also Has Some Big Birds

Want to know what a Frugivore is?  A Frugivore can actually be an herbivore or an omnivore that prefers fruit to other food types.  So basically a fruit-loving animal!  Other Frugivores include Orangutans, Owl Monkeys, and Fruit Bats.

The third biggest bird in the world is the Emu, which also appears on the Australian coat of arms.

Uluru Is Not The Largest Alone Standing Rock In The World

If you are looking for kids facts on Australia you might read that ‘Uluru’ is the largest standing rock in the world.  This is not true; Mount Augustus in Western Australia is the world’s largest rock.

However, in case you are confused, Uluru is the largest rock monolith in the world!  If you are interested in learning more, please check out our Interesting Uluru Facts For Kids post.

Oh, and if you like interesting rocks there is a huge one shaped like a wave in Western Australia.  Take a look at our Wave Rock Facts For Kids post.

Want to learn more about Uluru? Check out these great books about Uluru on Amazon.  Click each one for current prices.

Australia Is Home To The World’s Largest Reef System

Australia’s Highest Mountain Is Not That High

Although Mount Kosciuszko is the highest mountain in the Australian continent at  2.228metres / 7,310ft it ranks 71st in the world for its height (so basically it’s not very high).  Like many of Australia’s highest peaks, Mount Kosciuszko is not especially hard to summit.  There is a road to Charlotte Pass, from where you can follow a path to the summit.

Anybody with a modest level of fitness should be able to walk it.  Alternatively, there is a 2-hour hike from the Thredbo side!  Now, how’s that for a bucket list goal?  Why not climb Australia’s highest point on your next Aussie holiday? 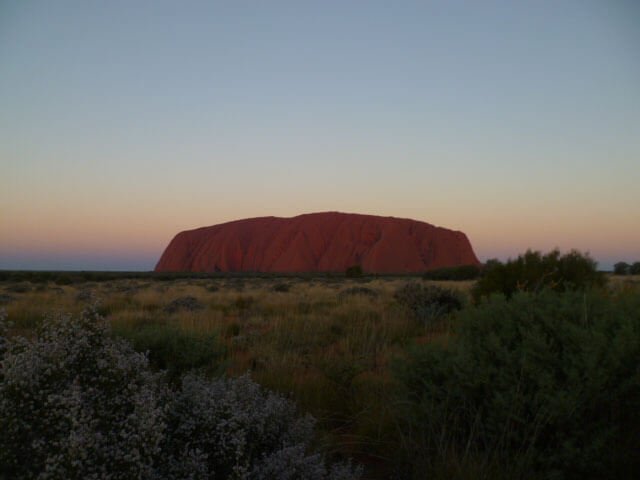 Australia Has A Town That Lives Underground

Due to the extreme heat of the desert, most of the inhabitants of the South Australian town of Coober Pedy live underground in dugouts.   There are underground motels, a hostel, and reputably an Airbnb.  So you might ask why people would even WANT to live there!  Well – Coober Pedy is the “opal capital of the world” because of the number of precious opals that are mined there – it’s the biggest opal mining area in the world.

Even the name of the town “Coober Pedy” comes from the Aboriginal words “kupa-piti” which translates into “boys’ waterhole”.  Can you imagine a town that is mostly underground?

Who Were Australia’s First Inhabitants

The indigenous Australians are the Aboriginal and Torres Strait Islander people of Australia.  These people were among the first humans to migrate out of Africa. The indigenous Australians are not just one group of people either.  Together they represent diverse groups of tribes and clans.  Tribes and clans that even had their own languages and dialects within those languages.

Also, Australia is really old!  Archeologists have uncovered evidence proving Australia to be the oldest continuous civilization on earth.  It dates back over 65,000 years ago! Can you believe it?

There Are A Lot More Sheep In Australia Than People

Australia is ranked as the 53rd largest population in the world.  With 67% of Australians living in capital cities, 23% in other urban areas (eg, regional cities), and 10% living in remote rural Australia.

Australia Is A Land Of Immigrants

While most Australia fun facts for kids lists will mention that Australia’s first immigrants were convicts brought from England for crimes in the 18th century, it’s less well known that  Australia has one of the most diverse populations in all the world.

It is estimated that 28% of Australians were born overseas.  That is a lot of people who were born elsewhere but now call Australia their home.  This creates a great melting pot of people and culture.

Australia Has A Queen

While Australia became an independent federated nation in 1901, the system of government is a constitutional monarchy which means that the Queen is the Head of State, with an elected government requiring her (or her representative’s) approval to carry out various processes,  including forming a government.

It seems that Australian’s like having a Queen, as in 1999 a referendum held to ask whether the people wanted to become a republic was defeated!

Aussies are mad about their ‘footy’ which is a unique type of football called Australian Rules football – it was sacrosanct in the southern states of Victoria and South Australia, as well as in Western Australia.  There is a range of interesting rules like you can’t throw the ball.  As for bouncing the strangely shaped ball, it takes substantial skill.

It is believed that the Aboriginal game of Mangrook inspired the rules for Australian Rules football, and that, the game’s initial purpose was to help keep cricketers fit during the off-season.   Be warned – other codes of football are more popular in New South Wales and Queensland while soccer is gaining ground Australia wide!

Some Famous Brands Originated In Australia

Two of the most well-known brands from Australia are UGG Boots and Vegemite (not to be confused with its British cousin, Marmite).  However, did you know that other brands like Qantas, Forsters Beer, Arnott’s, and even SPEEDO are Australian brands as well?

Voting Is Compulsory In Australia

That’s right, on state and federal election days in Australia everyone has to go to vote.  If you don’t have a good reason, you face a fine.  There are very few countries in the world with compulsory voting – and even fewer that enforce their rules with fines.  Given the system started several generations ago – in 1922, there is a high level of acceptance in the Australia population that they need to vote on polling day.

Australia was the second country in the world to give women the right to vote in 1902.  However, they did not give their indigenous population the right to vote until 1962, and even then it was voluntary.  This was changed in 1984 when all Australians were required to vote.

Australia Has A World-class Health Care And Education System

In addition to outstanding healthcare, Australia also has world-class (mostly) free education as well!  Having access to affordable education and health care makes Australia a great place to live and visit.  No wonder so many people immigrate to Australia from other countries.

Australia Is A Great Place To Take A Family-Friendly Holiday

Some of the most popular places to take a holiday are the capital cities.  As well as the Great Barrier Reef and Surfers Paradise on the Gold Coast.

Take a look at our Best Holiday Destinations In Australia For Families post.

Ok, I might be biased, but I really do think that Australia is one of the most fascinating countries in the world!  Yes, with a great healthcare and education system, plus lots of sunshine, cute fluffy animals we are really lucky!

Did you enjoy our Australian facts for kids?  If you think I need to add any hilarious, fun, interesting facts about Australia to this list, please do reach out to me and let me know!

Looking for more information on Australia? Check out some of our favorite kid’s books about Australia loaded with more facts and information.  Click each one for the current price on Amazon.

Like It> Pin It> Fun Australia Facts For Kids