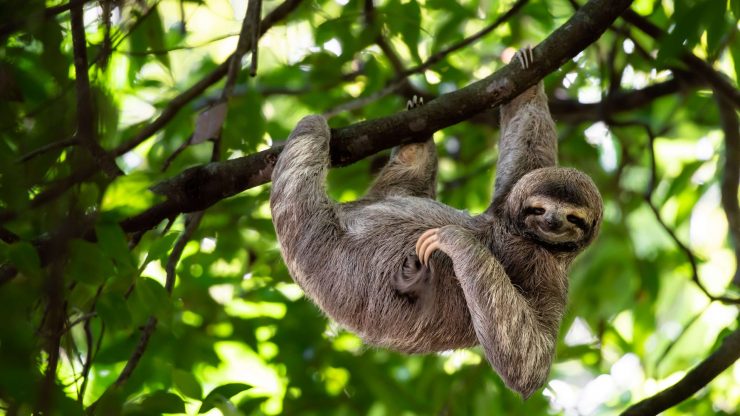 Sloths have hit the big time in popular culture.  Everywhere you look there are sloths and more sloths.  On social media, and in toy stores.  In fact, if you have kids there is a good chance you’ve bought a toy sloth in recent years – which is why we’ve added in some of our fave sloth gifts for kids at the end of the post.  However, we didn’t know a lot of sloth facts for kids before doing our research.  So maybe that is why you are here too, to learn all the most interesting facts about sloths.

Fun Facts About Sloths – My Own Sloth Experiences

A friend was recently raving about a sloth fabric she wanted to buy for her 5-year-old the other day and while I was thinking she was being a bit over the top, my mum piped up and said, ‘You remember those sloths we saw in South America”!  We could – with some reminiscing – recall seeing sloths a couple of times.  But – it was such a bland experience – that it was hardly a highlight of our travels.  The point my mum was making was – why such a massive interest in sloths when to see the actual animal it’s definitely underwhelming and could even be called boring!

Even though my experience with sloths wasn’t exactly memorable, sloths are interesting creatures.  So to satisfy your curiosity (and add to the sloth hype) here are some interesting facts about sloths for kids.

When Did Sloths Become So Popular?

Well, that is a good question and one that might not have a direct answer.  Many children (and adults) were introduced to sloths in Disney’s movies Zootopia and Ice Age both featured lovable and quirky sloth creatures.  Over the years there has been a steady increase in society’s fascination with these tree-dwellers.  The sloth’s popularity nowadays seems to be right up there with the always fascinating unicorn and the lovable llama.  Speaking of the llama, check out our Fun Alpaca And Llama Facts For Kids.

What Kind Of Animal Is A Sloth Exactly?

Sloths are a group of mammals that live mostly in trees.  We call these types of animals arboreal animals.  Arboreal meaning an animal that spends most of its life in a tree.

Other arboreal mammals include the orangutang, monkeys, some squirrels, and lemurs.  Now that is a fun fact about sloths that you can quiz your friends on.

What Do Sloths Represent In Popular Culture Today?

Sloths are the ultimate chill animal.  It used to be that calling someone a sloth was saying they were slow and lazy.  However, now it seems the sloth embodies the ultimate laid-back, no worries, attitude.  In such a fast-paced world that we live the sloth represents a relax and take it easy kind of vibe!

Plus, many people think the sloth is so incredibly cute!  But we aren’t convinced?  Let us know below some more sloth facts for kids and if you think sloths are cute or not.

Why Do Sloths Move So Slow?

One of the interesting facts about sloths is that they do move slow and for good reason.  For a sloth, moving slowly is part of its survival.  They have an extremely slow metabolic rate.  This is the rate that their stomach breaks down food.  Because of this they also don’t require eating huge quantities of food.  The slow movements mean less energy expended and less food they have to eat.  One of the main sloth facts for kids is that the sloth is the slowest animal on earth.

However, moving slowly is not JUST about food.  As we said, it is about survival.  Because the sloth moves so slowly it can not quickly escape predators like jaguars and ocelots.  So the sloth depends on blending in.  One of the interesting facts about sloths is that it actually grows algae on their fur to blend in with the environment.  A sort of algae camouflage!  Since predators like the jaguar depend on their sight to hunt prey, the slow-moving, camouflaged sloth doesn’t attract too much attention to itself.  Moving at a slow, measured pace is on purpose and has worked out well for the sloth.

Exactly How Much Do Sloths Sleep?

A lot!  Exactly how much is debated.  Some say the sloth sleeps up to 20 hours a day.  However, new research suggests that it is maybe more like 8-10 hours a day in the wild.  Sloths love to sleep hanging upside down from a tree branch or curled into a ball.  We have to admit they do look rather cute sleeping.

As we learned in our facts about sloths for kids above, their sleeping so much is to conserve energy.  It has nothing to do with them being lazy little creatures.

How Much Does A Sloth Weigh?

This all depends on the species of sloth.  A smaller species can weigh as little as 8 (or 3.6 kilograms) pounds and a large species, like the Maned Sloth, as much as 22 pounds (about 10 kilos).

What Do Sloths Eat?

As we might have guessed from our above sloth facts for kids, not much.  As mentioned before they have an extremely slow metabolic rate.  They can survive on a relatively small amount of food.  However, when they do eat they munch on tree leaves, twigs, and buds.  Another fun facts about sloths are that they do not have incisor teeth.  They actually “tear” the leaves by smacking them down on their lips.

Pooping For A Sloth Is A Major Event

One of the strangest sloth facts for kids (and maybe the grossest) is that pooping is a terrifying ordeal for a sloth.  It is such a major event that a sloth only poops, on average, once a week.  Can you imagine?  However, because the sloth is so slow and spends the majority of its life in trees coming down to go number 2 can be terrifying.  The sloth completely defenseless on the ground.  It cannot move fast enough to escape predators but it must come down to do its doo-ty.  Not only that but a sloth loses up to a third of its body weight in a single dump.  I guess that is what happens when you only go once a week?

So why does the sloth just not poop from the tree?  Good question!  One of the most interesting facts about sloths is their symbiotic relationship with the algae that covers their body.  How does this relate to them pooping you wonder?  Well, the sloth will climb down from its tree to poop so that moths can lay eggs on their poo.  These moths in turn land on the sloth depositing their camouflage algae covering on their fur.  This has to be some of the most bizarre sloth information for kids!

How Many Species of Sloths Are There?

In total, there are six different species of sloths.  One of the cutest fun facts about sloths for kids is how the species differ.  There are two different types of sloths, three-toed sloths, and two-toed sloths.

One of the super interesting facts about sloths is that, before the ice age, there use to actually be ground sloths the size of elephants. WHOA!  However, they died out in a mass extinction event just like the dinosaurs.

Who doesn’t like a baby animal?  Baby sloths are no different, they are so darn cute and tiny! A baby sloth only weighs about 10 ounces when it is born.  Perhaps incredibly though, the baby sloths are born with their fur.  Also, their eyes are open and they know how to climb.  But they stick around with mama for up to two years before they venture out on their own.

Are Sloths Endangered? Why?

Unfortunately, yes.  The Maned Sloth and the Pygmy Sloth are both considered endangered.  These two species have only ever existed in a small geographic area and urbanization and deforestation have both taken a toll on these habitats.  Sloths are prone to electrocution from climbing on power lines, animal attacks (such as domesticated dogs), and poaching.

The Pygmy Sloth is only found on a remote island off the coast of Panama and is one of the most critically endangered mammals in the world.  One of the true facts about the sloth is that they are excellent swimmers, especially the Pygmy Sloth!

To learn more about these endangered species, check out the Sloth Conservation Website.

Where Can I See Sloths?

Sloths live in Central and South American tropical rainforests.  Depending on the species, they can be seen from Costa Rica down into parts of Brazil and Peru.

Yes, that’s right,  you can see sloths in Peru!  If you have been following us here at World Of Travels With Kids, you know that Peru is very special to us.  We also consider ourselves knowledgeable on all things Peru travel.  Here are our Peru Facts For Kids, and also our Full Guide To Peru With Kids.

With Sloths being so popular, and interesting, it is only natural that you just have to have some really cool sloth gifts for kids.  Not only do these all make really great sloth fits for kids, but I suspect many adults would love them too!  Below are some of our favorites.  Click on each one to see current prices.

The Verdict – Sloth Facts For Kids

We hope you have enjoyed our sloth facts for kids.  Who knew there were so many interesting facts about sloths for kids?  I bet now that you know way more about sloths pooping habits than you ever wanted to!  You have to admit though, they are pretty amazing animals who have taken a unique approach to survival.  Do you have any other fun facts about sloths you’d like to share with us? Let us know below. 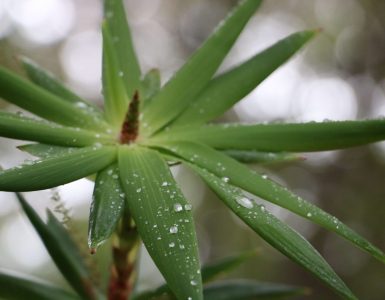