Peru facts for kids, a collection of 11 fun and interesting facts about the Republic of Peru, a country in western South America.  Peru is famous for its rich history and its ancient Incan villages, like Machu Picchu.  Lima is the capital of Peru.  There is also a lot to do in Peru for kids.

The Amazon River, The World’s Largest River, Starts In Peru!

Starting in the Peruvian Andes and running thru Peru and the entire length of Brazil before finally emptying into the Atlantic Ocean.  Lots of amazing creatures call the Amazon home like the piranha, the anaconda, the Amazonian manatee, and the Amazon River Dolphin!

Peru Is Also Home To The Deepest Canyon In The World!

The Cotahuasi Canyon is twice as deep as the Grand Canyon in the Unites States of America.

Cotahuasi Canyon is located near the city of Arequipa in Peru.  There are many abandoned indigenous sites along the Cotahausi River.  You might even discover a site never seen by archeologists as this region of Peru is very remote.

You Want To See A Llama, Go To Peru.

Did you know that llamas are cousins of the camel and highly intelligent animals?  Llamas can learn simple tasks after only a few repetitions.

Another fun Peru facts for kids is that many people confuse llama’s with their cute cousins, the Alpaca. So how can you know the difference? Look at their ears! Alpacas have short little ears with smooshed faces while Llama’s have longer ears and longer faces.

Guinea Pigs Are A Special Meal!

Yup, in Peru guinea pig is also a very special meal!!! Eaten on special occasions if you visit typical Peruvian homes you will hear the peeps and squeaks of guinea pigs running underfoot.  They are a natural garbage disposal, the local people just peel their potatoes, carrots etc. straight onto the floor where they are hovered up by the guinea pigs.  But what are you going to do if someone grabs a guinea pig and roasts it in your honor?

Peru loves its roasted Chicken so much it has a National Day to celebrate it.  Each year, the 21st of July, us the official Day of Pollo a la Brasa.

Polla a la Brasa is an authentic Peruvian chicken dish.  The chicken is roasted with Peruvian herbs and spices and served with different hot pepper sauces.

There are over 4000 species of potato and if you venture out to the communities you are sure to get served up a plate of boiled spuds.  The super food Quinua also originates in Peru, but don’t worry you won’t get served up Quinua, it is too expensive for the local people to eat, due to being exported as a super food.

The Peruvians believe that if you wear new, colored underwear on New Year’s Eve it will indicate what the future year will hold for you.   Yellow, for good luck is the most popular color!  Red is for love, and green is for money! 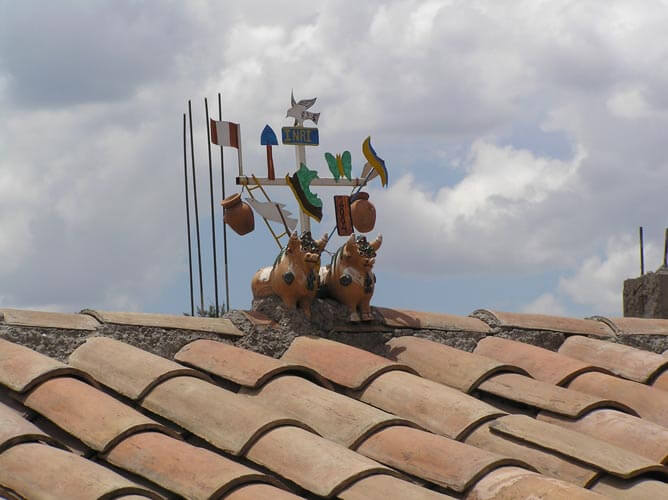 All Around Peru You See ittle Bull Statues On The Roofs, But Why?

Machu Picchu Was Not A Lost City.

It is now believed that it was abandoned before the Spanish arrived in Peru. Its actual purpose is still shrouded in mystery – it was once thought to be the home of hundreds of Inca but later believed to be the country home or weekend getaway of the Inca.

When the Spanish conquered Peru in 1532 they were not actually conquering a massive empire, but one that was divided and weak after years of civil war between two half-brothers Atahualpa, from the Quito region and Huascar – from the Cusco region.

As Machu Picchu is located near Cusco, it makes sense that the losing Cusco clans – and Huascar, were no longer taking pleasurable trips at their weekend getaway home.

If you are planning a family trip to Machu Picchu, make sure you check our of post of “Best Machu Picchu Family Hotels”.

Quechua Is The Language Of The Inca Empire.

By imposing one language on all the people, they unified what were previously a lot of warring tribes. It is a beautiful language for storytelling,

Many people in Peru only speak Quechua, especially the women in the high mountain areas.   Only recently has Peru decided to teach Quechua as a part of the Peruvian curriculum.

However, the Incas didn’t have a written language.  They recorded crops and numbers using Qhipus, a series of knots, and they told stories via textiles.

Many Believe There Are Still Lost Cities In Peru.

Andean explorers believe that there are most definitely lost cities in Peru.  The legends of lost cities of vast riches keeps people interested in the stories and also attracts a lot of explorers searching for these mystical cities.

We know that not all of the Inca Empire has been discovered and maybe, just maybe a lost city of riches and gold is waiting to be found.

Interested in learning more about Peru?  Here are some of our favorite Peru books for children.

We always travel with insurance, it has saved us numerous times.  World Nomads have specially designed travel insurance for families!  Take a look at their Family Travel Insurance here. 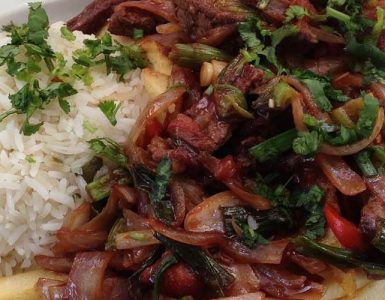 After multiple trips to Peru with kids, we definitely have some ideas of our best places to eat in Peru with kids.  I should mention Peru has some amazing restaurants (not kid friendly) and I’ve cheekily mentioned a... 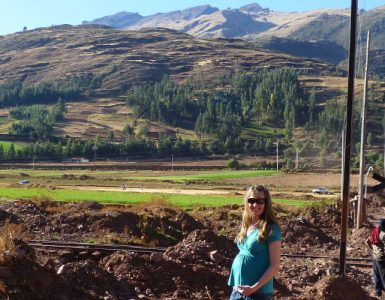 Are you wondering how high altitude and pregnancy will work? I’ve been pregnant twice at altitude and I’m using that experience to provide these tips and considerations for traveling to altitude when...

Peru For Kids – Advice For Traveling To Peru With Kids

Is Peru with kids feasible? We totally think so, having made numerous trips to Peru with kids.  A bit of preparation and good planning, and we think that you can definitely take on a family trip to Peru. Here is our...

Tips For The Best Photos Of Machu Picchu

Should I Take My Children Trekking In Peru

Lima With Kids: Things To Do In Miraflores With Children

Peru For Kids – Advice For Traveling To Peru With Kids

Trekking The Inca Trail With Kids