If you are looking for Sydney facts for kids you have come to the right place!  We love Sydney and have put together this group of facts about Sydney for kids that will make you smile.  And guess what, we even have a Sydneysider in the family.   Don’t know what a Sydneysider is, then you will have to read on to find out.

Is Sydney The Capital Of Australia

Sydney is NOT the capital of Australia.  However, it is Australia’s largest city with over 4 million inhabitants.

The capital of Australia is Canberra and has an interesting story about why it was built.  After the Federation of Australia in 1901, there was such a strong rivalry between the two main cities in Australia: Sydney and Melbourne.  Neither would allow the other to be the capital and eventually, they agreed to build a new capital which later was called Canberra. Canberra is located about 300km south of Sydney and was purpose-built.

Another fun fact is that there are only 13 purpose-built capitals in the world including Islamabad, Pakistan, and Brasilia, Brazil.

Sydney Is Home To The Iconic Sydney Opera House

The Sydney Opera House is one of the world’s most recognizable buildings!  If you’ve come to us looking for facts about Sydney opera house for kids then we’ve put together a whole section below.  Discover the story behind the Sydney Opera House, but for kids!

Located on the largest and most beautiful harbour in the world, the Sydney Opera House adds to the entire Sydney experience.

Interesting Facts About The Sydney Opera House For Kids Are:

5.  Despite the complicated design, the original construction on the Sydney Opera House was forecast to take just 4 years.  It ended up taking 14 years to complete and being highly controversial.

Sydney Is Also Home To The Sydney Harbour Bridge

Affectionately known as the ‘Coathanger’ by locals, the Sydney Harbour Bridge is another fascinating monument that is synonymous with Sydney.  For lots more information take a look at Sydney harbor bridge facts for kids

What Is A Sydneysider

Australians love giving people and places nicknames.  For example, someone who lives in Sydney is referred to as a Sydneysider while those from Melbourne are called Melburnians.  The state of Queensland is the land of banana benders, while Western Australia has wonderful beaches leading to the nickname, Sandgropers.

Lots Of Famous People Were Born In Sydney

If you are into Sydney facts for kids you should google who was born in Sydney!  Lots of interesting and eminent people.  But to make it easy for you the most famous Sydneysiders are Nicole Kidman, Hugh Jackman, and Russell Crowe!

Sydney Is The First Major City To See The New Year

Another fun Sydney facts for kids is that due to its location near the International Date Line, Sydney is always the first major city in the world to see in the New Year.  Sydney is famous for its incredible fireworks show around the Sydney Harbour Bridge and Sydney Opera house which is reputedly watched by over a billion people across the globe.

The New Year fireworks spectacle is set to popular music as the fireworks explode over the harbour, illuminating the boats and people watching.  The finale usually involves fireworks on the Sydney Harbour Bridge itself!

Sydney Started Out As Jail For Convicts From England

Rushing to establish a claim to the great South Land, the first Europeans to settle the Sydney area were a fleet of convict ships.  They landed at Botany Bay in 1788 and founded Sydney.

The majority of convicts were transported for minor crimes, like theft of a loaf of bread due to overcrowding and poverty in England at the time.  After serving their sentences they were freed and became the founders of Australia.

By the 20th Century instead of being a cause of shame, it is a cause of pride to be descended from a convict. It is estimated approximately 20% of Australia’s population has a convict ancestor.

From A Jail To A Fantastic Place To Live

How things change!  Another fun fact about Sydney is that the city is considered a GREAT place to live!  During the last ten years, Sydney has often appeared in the Top Ten Most Liveable Cities Lists, which are judged on criteria like stability, healthcare, culture and environment, education, and infrastructure.

Sydney Is Also One Of The Most Expensive Places To Live

According to a 2018 report Sydney was among the top 10 most expensive cities to live, in the Worldwide Cost Of Living Report which judged criteria like the cost of food, clothing, rent, transport, utility bills, private school fees, domestic help, and recreational costs.

The 2019 report rated Sydney more expensive than London and New York!  However, it is still cheaper than Singapore or Hong Kong!

One of the more colorful Sydney facts for kids is that Sydney is the spiritual home to the crossdresser!  It has an awesome Gay & Lesbian Mardi Gras parade each March which is also one of Australia’s biggest tourism events.  The Mardi Gras grew from gay rights parades in the late 1970s with participants being arrested, right through to the present day when it still champions LGBTQI rights issues or themes.  A much more open attitude prevails today with groups of uniformed Defence Force and police participating.

If you are interested in more, why not watch fabulous Aussie movie, Priscilla Queen of the Desert?

Sydney Has The Most Beautiful Harbour In The World

Sydney’s beautiful harbour is the most recognizable harbours in the world.  Not only are the Sydney Opera House and the Sydney Harbour Bridge located on Sydney Harbour, but so is much of Sydney.  There are so many gorgeous bays with sand and azure blue waters.  Without a doubt, Sydney Harbour is stunning and takes your breath away.

Sydney Has The Biggest Natural Harbour In The World

Not only is it the most beautiful, but Sydney Harbour is also the biggest natural harbour in the world.  It has a single entrance and a water area of 55 square kilometers.

Because the harbour is so big, many animals and species of fish call Sydney Harbour home.  These include the Grey Nurse Shark, Weedy Seadragon, Australian Fur Seal, Bottlenose Dolphins, Green Sea Turtle, and the Moray Eel among others.

Sydney, Australia is super interesting.  From basically being a place to house convicts in its’ beginnings to being one of the most expensive to live and iconic cities in the world.  There is so much to see and do in Sydney.  If you are thinking of visiting, check out our favorite Sydney guide books below!

Like It> Pin It> Interesting Sydney Facts For Kids 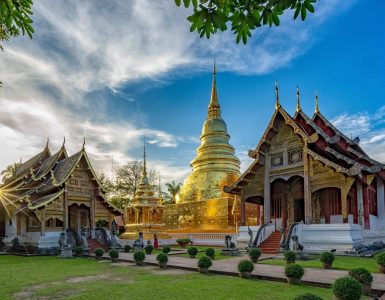 Thailand is a wonderful country full of culture gentle people, great food,  and exciting sights to explore.  Thailand is such a unique country that there are many interesting Thailand facts for kids.  In fact, Thailand...

As a city, Sydney is blessed with a lot to do and see.  There are tons of things to do in Sydney for kids and adults alike.  However, if you start getting itchy feet and wanting to get out of Sydney, we have called on...